Using personal names as trademarks – what you need to know

What do Bacardi, Deloitte, and Jacuzzi have in common? Apart from being famous and successful brands, they are also named after their founders.

While you might not often think about it, many of the world’s best-known brands are named after their founders. Here are some examples: Dell, John Deere, Lacoste, Leatherman, Disney, Mars, McDonald’s, Nestlé, Prada, Warner Bros, and Gillet. The list could go on and on. Then there are also brands that are named after an invented or imaginary person, such as “Warby Parker”, “Ronald McDonald” or “Uncle Ben’s”.

If you have a brand that’s based on a personal name, there are certain issues that you should keep in mind.

Registering names of people – not possible in every country

These examples illustrate that registering a personal name can be difficult in some instances. In many countries, there are exceptions and workarounds, such as having a distinctive logo, showing that the mark has a double meaning (e.g. Leatherman), the name being very rare, etc.

So having a brand name that is a surname does not necessarily mean that it cannot be protected. However, you should be aware that the protection might not be as straightforward as with “normal” trademarks.

Just like with other types of trademarks, the rights are established by registration. A person called John Smith does not have any particular trademark rights to his own name unless it is registered as a trademark. If there are prior similar trademarks, they may prevent the registration of the later trademark, regardless of whether or not it is the founder’s or owner’s own name. It is important to realise that you do not have an automatic right to use your own name as a trademark. You should instead search whether somebody has already registered the same or a similar name.

When comparing trademarks that consist of personal names, there are many different types of scenarios. You can have a trademark that consists only of first name, surname, or both. If the trademark consists of a first name and surname, the surname is normally more significant in assessing similarity to another trademark. This is because more people share the same first name and surnames are more common indicators of origin. If two trademarks share the same first name but have a different surname, they are usually sufficiently different.

If the overlap is in the surname (first names are sufficiently different), there can be a conflict especially if the surname is not highly common. The more common the surname, the less there is a risk of conflict in that situation. To illustrate, the EU court has held that marks ANTONIO FUSCO and ENZO FUSCO were too similar (FUSCO is not a common name) whereas marks MISS ROSSI and SISSI ROSSI were not similar (ROSSI is a common name in Italy).

If the comparison is between two first names, there’s a conflict if the names are similar. However, sometimes it may be possible to argue that, if the names are quite common and one is a female name and the other one is a male name, they are not confusingly similar.

We said above that you do not have an automatic right to use your own name as a trademark and that the use of your own name may infringe prior trademarks. There is a limited exception to this rule. The EU trademark regulation states that trademark owners cannot prevent natural persons from using their own name, provided that the name is used in accordance with honest business practices. This rule benefits in particular sole proprietorships, where the entrepreneur is acting in his personal capacity as a natural person, rather than as a company (distinct legal entity). Companies cannot take advantage of this rule.

There have been cases where this rule has been abused. Last year when Hugo Boss sent a cease and desist letter to a small brewery that was using the name BOSS as part of their trademark, a UK comedian Joy Lycett changed his legal name to Hugo Boss in support of the brewery and said that he would launch a range of products under the Hugo Boss brand. 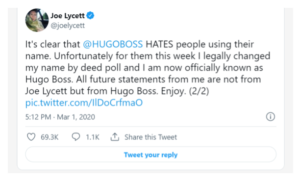 He also tweeted the following:

While that was clearly a joke in support of the Welsh brewery, changing one’s name and making derogatory remarks about the other brand would not qualify as using the name in accordance with honest business practices.

That said, when sole proprietorships and natural persons use their own name in accordance with honest business practices, they can take advantage of this own name defense. Companies like Ford, Dell, and Ferrari do not benefit from this rule regardless that the company’s name is the same as the name of the founder.

A to Z of brands named after people

To illustrate how common it is to use the founder’s name in trademarks, consider this short list covering every letter from A to Z.

Naming a company or its product/service after a person is very common. If you decide to join this prestigious club, you need to be aware that there are some countries where personal names cannot be registered as trademarks, or that there are at least extra hurdles. Also, if your company or brand is named after you, don’t assume that you have an automatic right to use that name because it happens to be your own name. Normal trademark rules still apply.