The conventional wisdom holds that differentiation is an essential part of marketing and product creation strategy. Differentiate or die.

Differentiation has two problems. First, very few products are meaningfully different to the extent that the difference is perceived by buyers and they buy the product because of that difference.

Companies often unrealistically believe that their products or services are truly different. Consumers do not necessarily share this view. They might not see or value that difference as much as the company thinks. One company that is often the poster child of differentiation is Apple.

Yet, according to studies, only 15% of Apple computer users consider Apple to be different from other computers and 77% of Apple computer’s buyers do not consider it different or unique (Byron Sharp, How Brands Grow). Buyers don’t typically consider two brands radically different. Apple and Dell computers both have a keyboard, mouse, screen, and an operating system. They are both meant for the same tasks that computers are used. The good news is that buyers don’t have to see the differentiation to buy a brand or to keep on buying it.

The second problem is that differentiation is not a lasting competitive advantage and in most cases, cannot be protected. It is not sustainable. Apple’s iPhone was truly a differentiated product when it came out in 2007. It had a large multitouch screen with no physical buttons. When Steve Jobs introduced it, he said: “oh boy, have we patented it”. Yet, it didn’t take long until the market was full of similar phones from other makers. The same happened with the iPad in 2010. It was different from all existing products, but similar products (e.g. Samsung’s Galaxy Tab) appeared very shortly after. The radical differentiation was completely lost in less than a year.

Why distinctiveness is a better goal than differentiation

Distinctiveness is important for both trademark (legal) reasons as well as for marketing reasons. In both contexts, they mean roughly the same thing: the brand’s ability to stand out so that it can be distinguished from other brands. Distinctiveness does not suffer from either problem associated with differentiation (lack of appreciation, non-sustainability). Distinctive brand assets are easily perceived and recognized as such. Secondly, distinctiveness increases over time. It is both sustainable and protectable.

When creating new products, companies should put heavy emphasis on creating distinctive assets. These can be:
– Name of the product
– Logo
– Slogan
– Product shape or packaging
– Colours
– Characters
– Sounds

Often, it’s a combination of many of them. 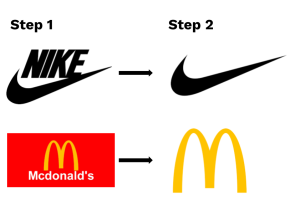 When buyers are considering buying particular products, they typically think of all the alternative products that come to mind. While product names are very important, logos can be much more impactful in reality. They are easier to remember and recall and their association with a particular company can be incredibly strong. Even if the logo says something else, it is hard not to think of the owner of the distinctive asset.

Coca-Cola’s and Disney’s fonts are so powerful that even if a competitor’s brand name is written with it, the immediate association is to the true brand owner (Coca-Cola or Disney), not to what the text says.

Of course, it takes time to get to the same level of recognition and distinctiveness as Coca-Cola or Disney, but that’s not a good reason to not create distinctive assets early on. It is equally important, if not more so, for a startup to have its brand be distinctive and easily recognisable among competitors.

A fundamental benefit of distinctive assets is that they can be protected with trademarks. Trademark protection creates not only a legal right but a foundation on which these assets can be built over time. The goodwill associated with a distinctive asset is captured by its trademark registration, which is an asset that can be sold or licensed. Building distinctive assets creates a sustainable and protectable competitive advantage.

In short, distinctive brand assets make it easier to have your brand noticed and chosen amongst all other brands. Differentiation is rarely appreciated by buyers who view competing products much the same, and it cannot be protected against copying.

Here’s again the difference in a nutshell.