Can a trademark substitute copyright? The curious case of Banksy

Trademarks and copyrights are different types of intellectual property, though they are often used to complement each other. A while ago, I wrote about the problems Ferrari faced with protecting its iconic Ferrari 250 GTO. Another curious case dealing with the overlap of copyright and trademark has just been decided by the EU trademark office.

The case concerned Banksy’s most famous work, the “Flower Thrower”, pictured below: 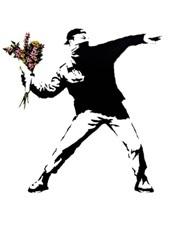 Pest Control Offices Ltd, the company acting on behalf of the artist, registered the Flower Thrower image as a trademark in the EU in 2014.

As is well known, Banksy’s identity has not been revealed, and that’s part of his mystique. That has also put him in a very difficult position. He cannot enforce his copyright against companies who sell merchandise containing his artwork. To do so, he would have to reveal his identity and to establish that he is the rightful copyright owner of the works.

To circumvent the problem of enforcing copyright, he registered the Flower Thrower (and in fact many other works as well) as a trademark. It is a common practice that famous works of art are also registered as trademarks because trademark registration brings with it several benefits. For example, the protection is not limited in time, and the scope of protection is much stronger. It is also much easier to show a legal right to a registered trademark. The government (or EU institution) issues a certificate of registration, containing all the details of the registered right.

Because of these extra benefits, protecting copyrighted works as trademarks is a common practice. For example, many of Gucci’s artworks and Disney characters have been registered as trademarks.

Usually, trademark registration also makes sense because the owner is selling products bearing that artwork (for example, a particular design). In addition to being a work of art, the design is used to indicate a commercial source, i.e. that the product belongs to a particular company. The design is used, in other words, as a trademark. Therefore it makes sense to protect the design as a trademark, despite the fact that it is also protected by copyright.

Banksy is different, however. According to the evidence presented in the case, he said over and again that he had no intention of making any commercial products bearing his artwork. When others started incorporating his works in commercial products, he made statements that in order to avoid the risk of losing his trademarks due to non-use, he started to sell his own products. He opened a shop in London called “Gross Domestic Product” in order to be able to show trademark use in a pending case.

In 2019, one of the companies using Banksy’s works, Full Colour Black Limited, made an application to the EU trademark office to have Banksy’s trademark declared invalid on the basis that it had been applied for in bad faith. Getting Banksy’s trademark invalidated would effectively give a free pass for violating his intellectual property since Banksy’s refusal to reveal his true identity effectively ruled out a copyright infringement case against Full Colour Black Ltd.

Why was Banksy’s trademark cancelled?

One of the biggest differences between EU and US trademark law has been that under EU law, the applicant does not need to have any particular intention to use the mark. That has been the position from the beginning of the EU trademark system.

This almost rock-solid and sacred principle has started to crumble in recent years. Earlier this year the top EU court held that while there is no requirement to have an intent to use the mark at the time of filing if there clearly is no intention to use the mark and the only reason for applying the trademark is to prevent another party from using the mark (artwork, in this case), the application could be deemed to have been filed in bad faith. Indeed, this happened to Banksy. The EU trademark office decided that he had filed his trademark in bad faith and ordered the registration to be cancelled.

It may seem unfair that he cannot now use trademark law to block others from profiting from his work. Since he is the author of the work (presumably), it may be hard to grasp why filing the trademark to prevent others from copying his work could be “bad faith”.

The explanation is simple, though probably open to disagreement. Trademarks are used to indicate to consumers the commercial origins of goods and services. In Banksy’s case, there are (at least, there were) no goods and services. Banksy had been vocal about not making merchandise, although he later changed this stance to, in his own words, “fulfil the trademark requirement”.

Banksy argued that using a trademark to enforce his rights (copyright) was a “legitimate objective” and the application could not have been filed in bad faith. This argument was rejected.

Firstly, not being able to enforce his copyright was by his own choice. He could’ve done it but chose not to because that would’ve meant losing anonymity.

Secondly, and more importantly, the EU office held that if the application is filed in order to obtain exclusivity for purposes other than “those falling within the functions of a trademark”, it was filed in bad faith. The function of a trademark is to distinguish the owner’s goods from all other goods, and this was never his intention. His intention was to prevent others from copying his work, not commercialising it himself.

His objectives (enabling him to enforce his copyright), while clearly legitimate in the larger scheme of things, cannot justify the filing of the trademark, apparently. Earlier, I wrote about Greta Thunberg’s case. She also declared that she has no intention of commercialising her trademarks and they have only been applied for defensive purposes, i.e. to prevent others from profiting from her name. Following the Banksy case, it seems that things might get tricky for Greta as well.

Firstly, if you have the intention to use the copyrighted work for products and services, a trademark is a good addition to the overall protection. It will complement copyright. They both have their limitations, but together they are a powerful duo.

Secondly, if you have no plans on using the copyrighted work for goods and services, do not at least state that publicly. Also, do not publicly state that the reason for your trademark application is just to prevent others from using your artwork. Keep quiet. The burden of proof for showing that the trademark application was filed in bad faith is on the party who’s claiming that. So don’t make their job any easier.

Thirdly, it now seems established that when assessing the bad faith of the applicant, the relevant sphere that can be taken into consideration is limited to trademark aspects of the case. Larger overall pictures, such as legitimate commercial or other interests that exist outside the trademark sphere are not relevant to the assessment.

As for Banksy, it is evident that his entire EU trademark portfolio is under threat. The same reasoning that led to the invalidity of the Flower Thrower probably applies to his other trademarks as well.

He could possibly neutralize the risk by miraculously developing a genuine desire to sell merchandise, and then file new trademark applications for the artwork. The newly found commercial acumen would not save the old registrations, because the issue of bad faith is evaluated as it existed at the time of filing. So it cannot later be remedied.

Also, he should stop flaunting the view that his trademark use is only to circumvent the use requirement imposed by trademark regulations (a trademark registration can be lost if it is not used for five years). Ironically, he must repent and embrace commercialism.

Finally, it could also be said that both parties acted in bad faith in this case. Banksy, for the aforementioned reasons, was trying to use the trademark system for something it is not designed for. But it could also be said that Full Colour Black Ltd acted in bad faith in bringing the invalidation action. The reason for the action was that they could illegally profit from Banksy’s works, knowing that Banksy would not go after them for copyright infringement. Luckily for them, there isn’t a provision in the EU law that prevents a party from bringing bad faith invalidation actions for the purpose of facilitating crimes.